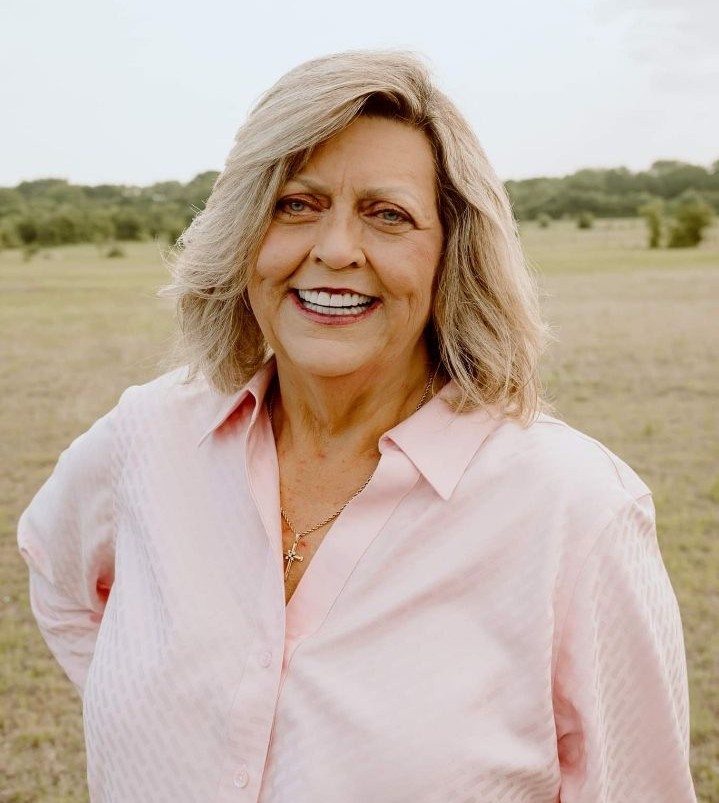 On Monday, May 30, 2022 Donna Kay Blount met Jesus face to face, and greeted Him with that amazing smile we here on earth all know and love.

Donna was born June 19, 1951 to Mervin and Colleen Slaton in Rugby, Texas.  She was a proud member of the Deport High School state championship basketball team, and always told us the story about the time she scored a half-court shot at the buzzer of the final quarter in the championship game. Jimmy knew he was going to marry Donna from the first time he saw her, and said so, even though he didn’t know her name and his friend told him she was too fancy for him.  Shortly after that, she happened to flag down that handsome young man while he was at the Sonic.  From that day the two were rarely apart.  They married on February 28, 1970, and Jimmy gladly ate nothing but spaghetti and unsweetened apple pie for six months while Donna learned to diversify her culinary abilities.  The two created a story worth telling.  For 52 years they blazed trails and took roads rarely taken.  They committed themselves to sticking together through better or worse.  Their love withstood the trials and the fires of life and is a true testament to what marriage should be. Donna wore many business hats in her career, including risk management and insurance sales, but above all she was committed to her family’s company, “Blount Speedy Rooter”.  Her title was “President and CEO”, but we all knew her as the backbone and the brains of the company. Donna lived a lifestyle of generosity, and had a God-given ability to pour grace on every situation she encountered.  She was actively involved at her home church, First Baptist Church of Troy, and was devoted to countless causes.  If you spent Saturday night with Donna, you were going to church Sunday morning.  She loved everyone she met with a special love only she could muster.  Her “wrap you up” hugs are one of the things we will miss most.  She told us how much she loved us with her extensive vocabulary.  We often didn’t know if she had a new word or just made one up for the situation, something we called “Donnaisms”.  If you were down when you called, you would be laughing by the time you got off the phone with her.  She used laughter at the end of her sentences in the place of punctuation.  She was the glue that kept us all together and a constant source of encouragement.

Donna/Mom/Gran/Aunt Donna left her fingerprints on everything she came in contact with, especially us.  We rejoice her pain is gone, but our loss is great.  We already miss her deeply.

Donna was preceded in death by her daddy, Mervin Slaton and her Aunt Sis.

Donna is survived by her husband Jimmy Dwayne, sons: Nick and wife Leslie, Jeff and wife Chasity, grandchildren: Vinny, Nicholas, Catherine, Brody, and Parker Blount, mom: Colleen Slaton, siblings: Kathy Holt and David Slaton, Josie the parrot dog, who loved being on her momma’s shoulder, and many nieces and nephews.

A special thank you to Trista Hill for articulating the words to embrace Mrs. Blount life.

Visitation will be held on Friday, June 3rd from 5:00 - 9:00 pm with testimony hour starting at 8:00 pm in the Young's Daughters Funeral Home Chapel.

Arrangements are in the care of Young's Daughters Funeral Home and Bereavement Center.

To order memorial trees or send flowers to the family in memory of Donna Kay Blount, please visit our flower store.