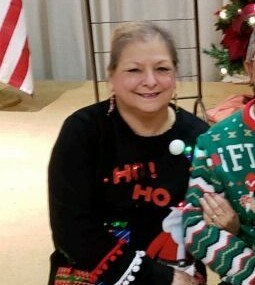 Services for Julia Kay Ramirez, 68, of Temple, have honorably pledged her body to science through Young’s Daughters Funeral Home, with a cremation to follow, and then scattering will occur in California.

Julia Kay Ramirez was born on January 4, 1954 to Joseph Gomez and Kathlyn Huston Gomez in Muskegon, Michigan. She grew up watching her fathers Rock Band. She moved to California and graduated from Venture High School in the 70’s  She began her secretarial career at Aigner paper company, then to Sunkist Co, lastly to a union oil company. She met Joe Vasquez Ramirez in 1972 in Venture, California and quickly married in 1973. Together they started their life and moved to Bakersfield, CA. She became a proud mother in 1976 and again in 1984 with her two daughters. They moved to Temple in the spring of 2015. She proudly remodeled her kitchen to the 1930’s theme and attended her butterfly, fruit and vegetable garden. Her hobbies included singing in the family gospel band and having a relationship with God. She will be remembered for her love of Chrstmas, and her red hot  1983’ Firebird. Her life lesson that was left “if you have it to give, then give”

She is preceded in death by her parents, one sister, Deborah Gomez.

In lieu of flowers please make a memorial donation to Joy Bastow of Belton Vet Clinic.

A special thank you to Baylor Scott and White Dialysis Center for their continued care.

To order memorial trees or send flowers to the family in memory of Julia Kay Ramirez , please visit our flower store.